Arctic regions are characterized by drastic seasonal changes in light intensity and duration with extended periods of permanent light or darkness. The circadian clock, an internal time-keeping system, regulates various physiological processes through the generation of approximately 24-hour circadian rhythms in gene expression. This clock needs to be entrained by external cues, for example light, to remain synchronized with the environment. To date, no studies have demonstrated circadian clock gene oscillations in Arctic organisms during the polar night.

Dr. Damien Tran and Dr. Mickael Perrigault from CNRS/University of Bordeaux collaborated with Akvaplan-niva scientists, Dr. Hector Andrade, Dr. Lionel Camus and Msc. Carl Ballantine to study whether putative circadian clock genes and putative light perception genes could be identified in the Icelandic scallop Chlamys islandica. By taking tissue samples from scallops placed in cages in Ny-Ålesund, Svalbard, during the autumnal equinox and polar night, they were able to show that oscillation of some genes shifted from daily to tidal periodicity between both periods. In addition, they showed that these gene oscillations could be related to the scallop’s gaping behavior (opening and closing of the valves). 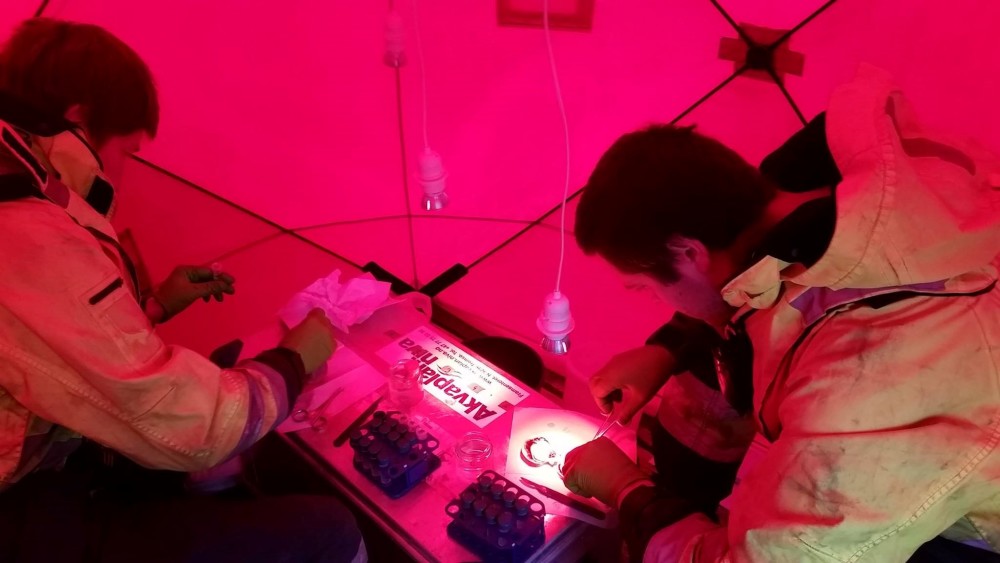 Photo: Damien Tran (left) and Mickael Perrigault (right) dissect Icelandic scallops to sample gonad, mantle and abductor muscle tissue during the polar night. Red light is utilised during the dissecting process because the wavelength emitted by this light is not visible for scallops. (Photo: Carl Ballantine/Akvaplan-niva).

The study suggest that scallops have developed specific mechanisms to perceive the very low light intensity available during the polar night, to synchronize their internal clock system. These results, just published in the journal «Proceedings of the Royal Society B», are the first evidence of the persistence of clock gene expression oscillations during the polar night and might suggest that functional clockwork could entrain rhythmic behaviors in polar environments. This successful collaboration was possible thanks to funding from the French National Research Agency, the French Polar Institute, the Fram Centre flagship «Fjord and Coasts» and the Svalbard Environmental Protection Fund.

Environmental monitoring systems in the Arctic